What Mardi Gras Beads can teach you about Advertising…. 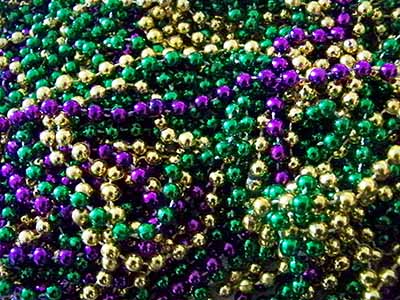 Whether you’re a business owner or an ad exec or an ad sales person, you need to hear this little story!

This story is about trade shows but it applies to any advertising or communications project.  If you’ve never been to a trade show, sooner or later someone hands you a bag and you fill it up with brochures and “giveaways” as you stop (or run) by each booth at the show.  It can be pretty tiring and after a while, all the booths & people and brochures look the same.  It really is hard to tell one from the other.

At one trade show, years ago, I remember trudging into the last room of the show, with my overfilled bag in tow, when an exhibitor called out to me “Hey miss, would you like some Mardi Gras beads?”.  My first thought was “NO”….make that “HELL NO”.  I really didn’t want to talk to anyone else, nor did I want any more junk… especially not some crummy, plastic Mardi Gras beads (who does, unless you’re in New Orleans in February?).  But to be polite I took the beads and listened to his “spiel”.  I swear I didn’t think of that guy again until I got a phone call SEVERAL weeks later from a man who immediately identified himself by saying “Hi, remember me?  I’m the guy with the Mardi Gras beads!”.  And of course, I DID remember him.  Despite the fact that the beads were really a “throw away” item, that was the ONLY person…in the ONLY booth at that entire show that I could actually picture and remember.  Why?  Because of those stupid Mardi Gras beads!  It may not have been anything particularly classy, but it was memorable.  That man had used the age-old MEMORY technique of associating his product or business with something ELSE that was memorable.  A great part of advertising is just helping people to remember who you are so that they can recall your name or product when it counts.  Sometimes it doesn’t even matter if your product isn’t remembered in a positive light…because sooner or later the customer will forget the negative part and just remember your product.  (That’s why they say even bad publicity is good publicity i.e., who even thinks about the Tylenol scare of the 80’s?  All we remember now is that when we have a headache, we buy Tylenol).  I recommend using this memory technique each and every time you create an ad or brochure or go to a trade show.  Of course it would be nice if it was something applicable to your business…preferably something classier than Mardi Gras beads, but just remember that every time you communicate with the world, it will help your reader to remember you if you give them some “Mardi Gras beads” to grab on to!!

Emily Andros is a 25 year Advertising Industry Veteran with both “In-house” and “Ad Agency” experience in the B to B and B to C arenas.  She graduated from University of Texas Austin with her degree in Advertising and has a wide array of experience that she is happy to share with the business world.  She can be reached via her email at emily@mdept.om